The airport property was originally owned by Don Inman, who maintained and operated the grass airstrip known as Seaside-Gearhart airport from 1946 through the 50s. During that time general aviation was booming, state and federal governments were financing small airport development, and Seaside wanted in on the act. So in 1960 they convinced the State to purchase the airport and install a paved runway, taxiways and parking ramp. The state owned and operated the airport until 1990, when it was deeded to the city of Seaside on condition that they keep it open and operating as an airport for at least 20 years. 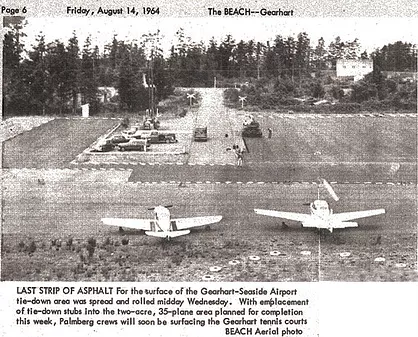 For several years the airport received basic maintenance but little else, and by 2003 it began showing signs of benign neglect. A group of local pilots appeared before the council to make a case for improving the airport, highlighting the potential benefits of attracting upscale flying tourists to the city. The council conducted a workshop and ended up declaring nearly unanimous support for keeping the airport and getting started on improvements. It also became apparent that the city could benefit from outside guidance on issues involving the airport, and a new airport advisory committee was formed.

The city has since made over $1million worth of improvements at the airport, including upgraded drainage, taxiway and runway repairs and realignment, new beacon tower and rotating beacon, new runway lighting, obstruction removal and avigation easements, security fencing, and improved visitor parking. Much of this work was accomplished by local contractors, and all were 90-95% funded through FAA airport improvement grants. Additionally, a group of private individuals financed and built a hangar bank, bringing several new based aircraft to the field.

In 2019, the FAA reclassified all airports in the National Plan of Integrated Airport Systems (NPIAS) and deemed Seaside to be "unclassified". In essence this means that the airport is no longer egible for regular FAA airport improvement funding. A number of criteria are used to determine classification but the key metric in this case is number of based aircraft, and with fewer than 10, Seaside remains below the line. Friends of the airport are hoping to change this by attracting more aircraft to base at the field.