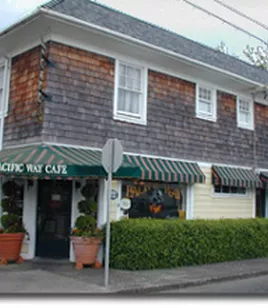 Seaside and Gearhart are both close to the airport, and there are numerous attractions in each, most within walking or biking distance. A few of those are listed below, more or less in order of proximity to the airport.

Gateway Park, Necanicum estuary, and Neawanna Point natural history site are just across the highway. Walk out airport road, cross the highway and just a few steps south, and you're there. There's a short walking trail that borders the estuary and goes through a section of old-growth spruce forest.

From there it's a short walk south to A Mighty Thai and Sushi, the closest restaurant to the airport.

A pleasant 1 mile walk will get you to Gearhart's tiny downtown with a few shops and eateries. From the airport, cross the highway and walk north about 100 yards to G street. Turn left (west) and follow G as it jogs right and becomes Neacoxie, then F street. Turn right (north) on Cottage, and go a few blocks to the four way stop in the center of town. On or near the corner of Cottage and Pacific Way you will find the charming and popular Pacific Way Cafe' & Marketplace, and By the Way for coffee and gifts.

The walk into Seaside is a bit further but not unreasonabe, and pretty easy on a bike. Those who make the trek will be rewarded with a wide choice of restaraunts, shops, hotels and arcades, not to mention the beach -- that is, everything you might expect to find in a beach town. Distance is about 2.25 miles. The key to an enjoyable walk (or ride) is to get off the highway and take the back roads. From the airport road, take highway 101 south, crossing to the west side (carefully!) at or before the bridge that crosses the Necanicum river (about 1/4 mile from the airport). Just beyond the bridge, turn right (west) onto 24th avenue. 24th shortly curves southward and becomes Holladay Drive. Follow Holladay past the high school and the river estuary overlook to 12th avenue. If you don't have a bike you can rent one or a Surrey at the Prom Bike Shop at the corner. Continue south towards Broadway and you'll shortly come to Broadway, the main east-west street which terminates at the famous beach-front Turnaround. A nice alternative is to take Holladay only as far as 12th avenue, turn right (west) on 12th and take it all the way to the oceanfront Promenade. Follow the "Prom" the rest of the way south to the Turnaround (Broadway) right on the shore.

There are plenty of restaurants in downtown Seaside, and it's tough to pick out which ones to recommend. But two seafood places that have a loyal following (and frequently a line out the door) are Norma's Ocean Diner, at 20 North Columbia (1 block north of Broadway), and Doogers Seafood & Grill, at 505 Broadway (airport pickup available, workload-permitting). For some authentic italian food in a cozy intimate atmosphere, try Nonnis, on Broadway between Roosevelt (Hwy 101) and Holladay. Oceanfront dining (and lodging) can be found at the Shilo Inn at the Turnaround on Broadway, and the Seaside Oceanfront Inn at Avenue G and the Prom. And speaking of lodging, renting a house is less expensive than you might think – Seaside Vacation Homes and Meredith Lodging are just two of several property managers hosting lovely beach houses that can make your stay a memorable one.

Other favorite attractions include the Seaside Aquarium and the Seaside Museum and Historical Society (both downtown), and the Outlet Mall (about 1 mile south of the airport on highway 101).